Back in the day when Street Fighter 2 was still new and there wasn't much story beyond the game endings and SNES instruction manuals, Malibu comics decided to give a comic book series based on the video game series a shot. Unfortunately it was so bad that Capcom pulled the plug on this after three issues.

Last issue Sagat kept trying to have a rematch with Ryu to regain his Street Fighter title. Bison suggested he go after Ryu's friends to force Ryu to fight. Balrog challenges Ken to a fight, who is now some sort of movie star and not in the same shape as he used to be. Ken managed to defeat Balrog, but he's in bad shape, and now Sagat comes in to finish the job. 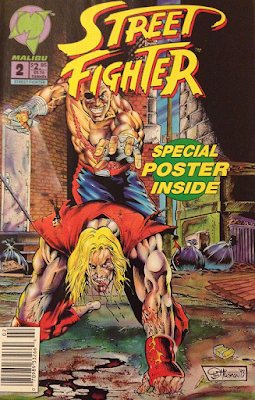 'Clawed by the Tiger' starts off with Sagat roasting Ken from behind with a Tiger Shot. Sagat tells Ken he's learned many secrets at a high costs as he continues to shoot his fireballs. Ken is surprised Sagat can throw fireballs now and says fireballs are his territory. Sagat effortlessly nulls it out and says Ken isn't a warrior, he's a beginner (his SF2 winquote).


As they fight, Ken tries to be careful since he remembers Sagat being one of the most powerful Street Fighters in the world that Ryu was barely to beat in the tournament (even though last issue it looked like Ryu was owning him). However, he gets hit by the Tiger Uppercut and gets kicked around by Sagat's deadly kickboxing techniques. Ken asks if Balrog was working with him, and Sagat says he's pebble in the path he has to take, and he won't be satisfied until he's the world's strongest again.
Ken reminds him that he'll have to defeat him and Ryu to regain that title. Sagat takes out his anger over his defeat to Ryu and punches the hell out of Ken. Ken is in bad shape, especially after his fight with Balrog and figures he has to escape that alley and to where he can dodge him. Ken tries to make a break for it, but Balrog shows up in his limo, blocking his path. Sagat says this isn't like his movies, there will be no retakes in Ken's life and death.


Ken tries to ask Balrog what's going on, and then he gets out of the way as Sagat smashes his fist into Balrog's window. Sagat kicks Ken against the car. Ken manages to hit Sagat with a fireball, but then Balrog hits Ken by slamming the car door onto his back. Sagat yells at Balrog and tells him to keep out of it. 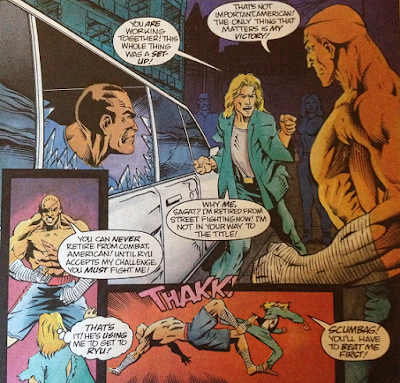 Ken finally figures out that Balrog and Sagat are working together and asks them why they're after him, since he's a retired Street Fighter and not in Sagat's way for the title anymore. Sagat says one can never retire from being a Street Fighter and he must fight Ken to make Ryu accept his challenge. Ken tries to take down Sagat, hoping he is at least faster than him.

Balrog reports to Bison that they're getting ready to finish Ken off, though he was a lot stronger than he remembered. Bison only cares that they defeat Ken and Ryu. Balrog asks what he's got on Sagat that's making him fight so hard. Bison says it's none of his business, and what he holds means more to Sagat than life itself. Even if he fails, Bison says he has lots of alternatives since his Shadaloo organization has many resources. As he does he, he catches a random guy and snaps his neck, while using his arcade win quote (anyone who opposes me will be destroyed!)

As Bison talks to Balrog, Vega is training his killing skills on random fighters. Bison congratulates his new recruit but says there is still a lot to learn. Vega says he's ready, and Bison prepares to fight him. 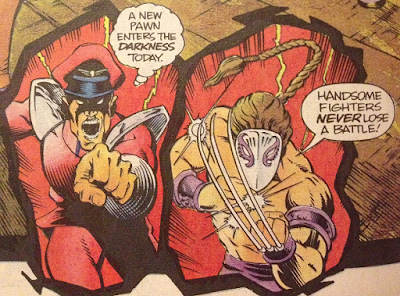 Ken and Sagat's fight attract an audience, thinking Ken is filming a movie. Ken thinks to himself that Sagat falls for Low Short Kicks and Low Roundhouse Kicks knock him down (just like in the game!), but Sagat keeps getting back up. Ken catches one of his kicks and tosses him into a street sign. Bleeding internally, he thinks if he's going to take Sagat down, it has to be now. Ken puts everything he has in a Dragon Punch.

Sagat thinks that if he wasn't stronger and Ken wasn't weakened by Balrog, the Dragon Punch would have defeated him, just like Ryu did. He remembers how people taunted him after his defeat and how low he sank, apparently killing someone in a random fight and getting arrested. He owes Bison for getting him out of jail. Sagat wonders if he must repay his debts at the expense of Ken.

Balrog tells the random people that Ken is filming a movie and is up for autographs. As people gather around the movie star, Sagat decides that Ken is defenseless and now is the time to take him down. Sagat starts to fry the hell out of Ken with consecutive Tiger Shots, and the people in the area run, realizing that this is real.

Ken questions Sagat's honor since he is now threatening innocents, and the kickboxer yells that he has no choice. Ken tries to attack, but Sagat beats the hell out of him. Ken says he knew Sagat was a jerk, but he never thought he'd be a killer. Sagat yells that he is now as he finally beats Ken down. With Ken a bloody mess, Sagat says he's taken his first step to the road to hell. Balrog tosses him a knife and Sagat says he does this because he must. Sagat grabs Ken and pulls back the knife, and Balrog says it's time to take home their trophy.

Meanwhile in Japan, Ryu reflects on the changes in his life and meditates, remembering his past training with Ken. Ken tries to attack Ryu with a knife, pretending to be a random attacker, and Ryu quickly defeats him. Sheng Long shows up and is angry that they practice with weapons, even though he trained them to use their bodies as weapons. Ryu and Ken bow and apologize, but he fries them both with a fireball.

Ken asks why he did that, and their sensei tells them that they treat their training as if it were a game. He then asks Ken to create a fireball. Ken tosses a Ha Do Ken (wow, he actually said it). Sheng Long is pleased and asks Ryu to do one. Ryu says he tried many times but he can't. Ken teases him until Ryu gets angry enough to fry him with a Ha Do Ken. Sheng Long is impressed and Ryu says he owes his progress to his friend.

Back to present day, Ryu determines that if he to find his center, he must rebuild his relationship with Ken. Just then a car drives into the scene, trying to run him over. Ryu dodges it and asks who would dare to invade his privacy. He punches the care engine (possible reference to the game) and wonders who would try such an attack. As he examines the driver-less car, he finds a box that says 'for Ryu' and finds pieces of Ken's bloody shirt and his bloody scalp. Ryu yells out the name of his oldest friend in sheer horror. 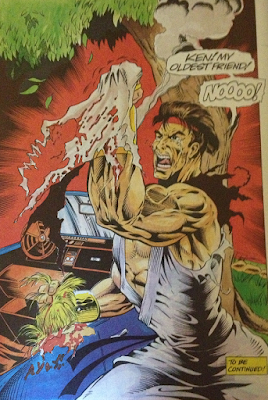 What an issue! They sure as hell didn't skimp out on the 'ultraviolent action' and they weren't kidding when they said 'one of them might not survive!'. This was insane back when I was a kid, and I'm glad the characters also did some punches and kicks here and there and not just spamming special moves. It was cool how they even added the fact that Sagat can be taken down with low kicks, which a strategy that works in the actual game. You get a feel of how powerful Balrog and Sagat are as well as how Ken is a little rusty and it was better for him to get the hell outta there.

But wow... as a kid, the idea of Ken, one of the major characters and arcade favorite being killed, and after 2 issues no less... I was speechless back then. I was already imagining the comic continue and the story moving forward without Ken except for flashbacks.

Sheng Long makes an appearance back when we thought the name of Ryu and Ken's sensei was Sheng Long. The old 'You must defeat Sheng Long to stand a chance' quote was referring to the Dragon Punch and later games would reveal their master's real name was Gouken. And he didn't have claws.

An interesting thing to note was this advertisement at the end of the comic. It seems they were selling 'Gold Edition' versions of the first three issues for 15 bucks each. Um.... wow. I have no idea what those 'Gold Editions' would contain that would make these comics worth 15 bucks, other than possibly the Street Fighter logo being 'golden' on the cover. A limited amount of them were made and whoever got the first issue got first crack at issues 2 and 3. And anyone buying these would get the first shot at a special offer that 'would be announced to the general public at the end of the year'. Sucks for whoever bought these 'rare 15 dollar comics' since they would never get to see what this 'special offer' is. 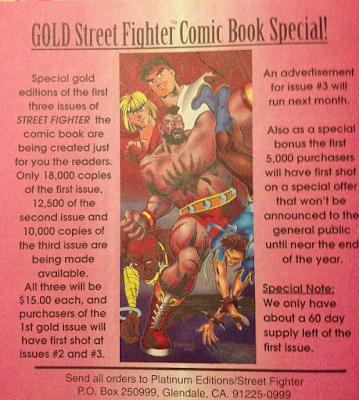 It is a coincidence that only the first 3 issues were to have gold editions, and only 3 issues were ever made. Was this a sign that they already knew they were pulling the plug on the third issue already?

Well stay tuned as we find out what happens in the third issue and well.... it's anything but what one would expect, especially following this cliffhanger.
Posted by MarkRodriguez09 at 10:00 AM

Leave your thoughts on this article!

Dragonball- It's time to go beyond Z or end it 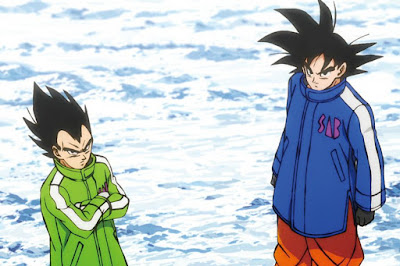