The Armageddon Game is here! The Rat King begins his deadly game with the help of Krang, Baxter Stockman and Madame Null. Meanwhile, Shredder trains the Turtles in the mystic arts to prepare for this event. Now the heroes will go to gather other allies that could be useful in this epic battle. 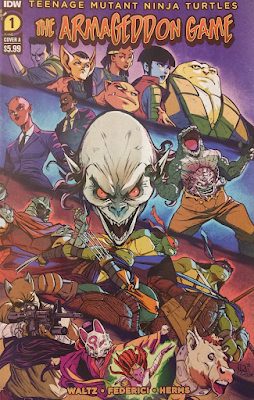 The story opens with Kistune in a deep slumber as she regains her powers after helping Shredder in an earlier ritual. She is being watched over by her sister Aka, when suddenly the Rat King appears. Aka asks if he came to gloat. He says he is only there to wish them luck. Aka says he might have the advantage since he's been spying on Kitsune. He says he is content only with knowing that she is playing the game, there wouldn't be any fun in cheating. The Rat King says the time has come for the game to begin. 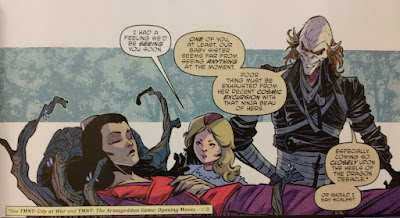 Meanwhile in the Turtles' current church lair, Shredder has gathered the members of the Splinter Clan and the Foot Clan together on what he calls neutral ground. Karai says it's hardly neutral ground since this is the Turtles' home. Shredder says for now they will have to act together to stop the upcoming apocalypse. Karai thought they were discussing some sort of game. The Turtles explain that the Rat King has teamed up with Baxter, Krang and Null and it looks like New York is just the start. They intend to take over the world. 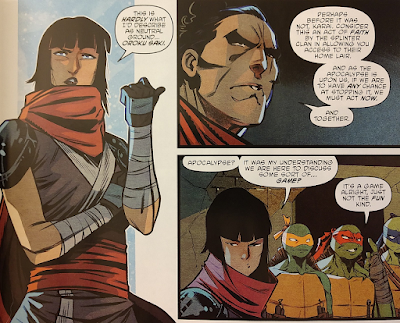 Karai asks how they intend to stop the Rat King. Shredder explains that they will find allies that have caused trouble for the Rat King's pawns and might do so again, but some of them are off the planet. Shredder will leave for Dimension X with Leo and Mikey while the others stay with Karai to watch over New York and Mutant Town. Karai asks how he knew about this information and she senses that Kitsune is involved. Shredder says he doesn't need to answer that and Kitsune is currently indisposed. As he prepares to leave, he tells the rest of the turtles to fully brief Karai on everything and whispers to take it easy on the kuji-kiri techniques they learned.

Don tells the Neutrinoes in Dimension X that they are ready to be teleported to their planet. Shredder, Leo and Mikey are teleported. Don goes to finish working on his communication equipment so that he can reach out to April and the others. This leaves Raph and Jennika with Karai.

Elsewhere, at Null Industries, Leatherhead is attacking Null's soldiers as well as Zodi and Krisa. Krang tells Leatherhead to calm down as the soldiers are here to help them. Zodi and Krisa try to take Leatherhead down but are sent flying back by his tail. Krang berates them for not being able to rescue him. Zodi says they're here for a retrieval mission. Krang says Leatherhead does not want to be 'retrieved', he has a death wish. He won't stop until all the Null soldiers are dead or until he's dead, which would also kill Krang.

One of the soldiers tases Leatherhead and Krisa, the mutant snake, takes this chance to wrap herself around him. Zodi decides what to do and Krisa says she can't hold him still for too long. Krang says Zodi is a scorpion and should just sting him. Zodi says that level of venom can kill him as well, but Krang says to do it anyway. Zodi stings Leatherhead and the mutant gator falls unconscious. Zodi makes sure Krisa is alright and they both prepare to board Leatherhead and Krang to the chopper. 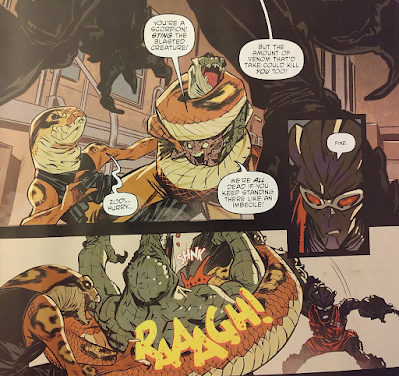 Leo, Mikey and the Shredder arrive on planet Neutrino. As you'd imagine, Leo and Mikey receive a warm welcome while Shredder is being detained and watched over by armed guards. Harold is there too and he thinks the Turtles are crazy for having teamed up with him after all the trouble he's caused in the past.

King Zenter, Queen Gizzla and Princess Trib arrive. While they are pleased to see the Turtles again, they cannot honor their request for help in saving their planet. 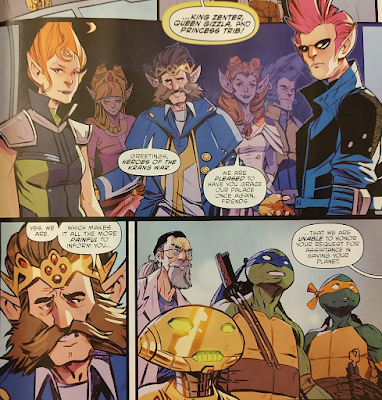 The Rat King visits Madame Null as they arrived outside the Earth Protection Force building. This is timed perfectly as Zodi and Krisa arrive by helicopter with Leatherhead and Krang. Null tells Zodi to put them inside the dome and the Rat King tells them to hurry since the 'doctor' is anxious to receive his prize. Speaking of doctors, Null asks how things are going for Stockman. Rat King informs her that Baxter secured the full use of the building without interference from the EPF. He says Baxter will be playing his part later tonight, but for now they have promises to keep.

Doctor Barlow is upset at the condition they brought in Leatherhead. Zodi tells him to calm down, and that he's lucky Leatherhead is alive since he took enough venom to put down three elephants. Null explains the enhanced healing attributes to the mutagen will make mutants so much more valuable for the multi-versal labor market. Rat King explains that Null will get her riches, Baxter will get the White House and Krang will be restored to the Utrom Throne. At the same time, Barlow will get to keep Leatherhead to experiment with, as soon as he's done removing Krang.

Elsewhere, at the Mutant Town City Hall,  Raph is trying to interrogate Herman, who is locked up, on Old Hob's whereabouts. The crab only gives his name, rank and serial number. Jennika jokes that they should try more enhanced interrogation techniques. Sally tells her that's not happening and Jennika says she was only kidding. 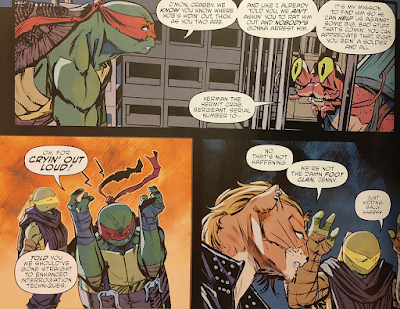 Sally reaches out to Herman, telling him they didn't want to lock him up but he didn't give them much choice. This is his chance to redeem himself as a hero and a good soldier. Herman says he'll help them out on the condition that he will escort Raph to Hob directly and he wants all his weapons back.

Donnie keeps Angel and Casey up to date on what's been happening. April says they will be watching as Stockman will be giving the state of the city address tonight. They'll be working with Mona Lisa and Lola to make sure Stockman isn't spreading any misinformation. Casey asks who died and made Shredder the boss. Donatello somberly reminds him that his father died,and Casey apologizes. April tells Donnie it looks like someone else needs his attention as a female Triceraton holding a baby is standing behind him.

Back on the Nuetrino planet, the King explains that they won't be able to help them since this would risk disrupting the treaty they have with the planet Aerwyl. After the Utrom Empire collapsed, there was a power vacuum across Dimension X, soon filled by Chancellor Mazool. Due to his dictatorship, members of the Nova Squadron rebelled so they were captured and called traitors. They escaped capture and became freelance bounty hunters known as the Nova Posse. Due to the current truce, the King cannot be seen endorsing anything other than trying to capture the Nova Posse. They also can't help the Turtles find Cherubae in Dimension Z since multi-versal excursions would also break the treaty. The king must put his people first. 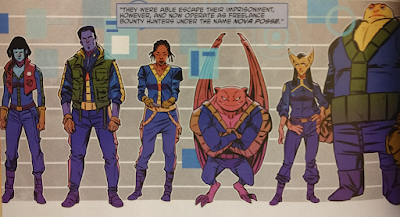 The King apologizes for not being able to help, and also for the extra surveillance over Saki. Saki says he understands. The King also reminds Zack and Kala are due for some well-deserved leave from their duties and maybe the Turtles can accompany them during their vacation, unofficially of course. As the King and Queen leave, Mikey asks what he meant by that. Trib says that her father is a great king but an even greater friend. She kisses Mikey as she wishes him luck. Zack says they're ready to go.

At New York City Hall, Baxter gives his speech declaring things have never been better in the city and is also safe from the mutants in Mutant Town thanks to him. Just then someone blurts out 'LIES!'. Evil versions of the Ninja Turtles, using the same weapons as the originals, start attacking the crowd to show that they're not safe from 'the big bad mutants'. Detective Lewis and Detective Hernandez protect the Mayor. Lewis, having met Michealangelo before, is confused by what the Turtles are doing and gets smacked aside by the Turtle using the nunchucks. The turtle with the sai grabs Baxter.

Agents from Darkwater arrive telling the Turtles to release the mayor and to stand down. 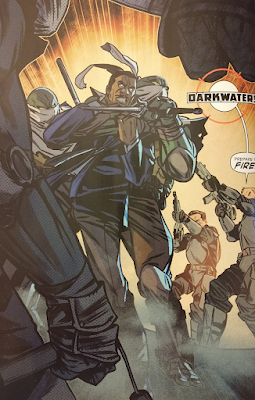 What a character-packed issue, and things are going to get even more crowded once things go into full swing. I didn't think it would be easy to for the heroes to locate the Nova Posse and Cherubae in the random reaches of space, so it looks like at least the first half of this saga will be about getting everybody together. We have yet to see how Raph will recruit Hob as well.

Speaking of Nova Posse, it was pretty clever how they were first called the Nova Squadron in 'Opening Moves' and were now re-named to the name they had in the Archie comics. Also, I believe Mazool was the villain the Archie Turtles faced when they met the Nova Posse during that story arc, so I suspect he will be appearing somewhere as the Turtles try to find them. I don't know how Cherubae and Cudley the Cowlick will factor into all of this though.

We finally see how they'll get to remove Krang from Leatherhead and how the mutant gator will survive the procedure. Mutagen has been known to heal things in the IDW comics, not just mutate them, so it sounds like Dr. Barlow will use that to somehow have Leatherhead re-grow all his insides once Krang is removed. The Rat King also did a good job explaining to the reader all of his teammates motivations while making it sound like more dramatic monologue.

I also would like the add that the art is fantastic in both this and in the Opening Moves two-issue mini-series. It's just kind of odd that the top artists are being used more in separate tie-ins than in the main series. The current art in the main book is kind of an acquired taste; a take it or leave it scenario. Since this is the big Armageddon War everything that has been leading up to since the Rat King's first appearance in the IDW comics, we need top of the line artists on the main title too.

Finally, the mysterious evil ninja turtles that appeared in this year's Free Comic Book Day issue finally make their appearance here. I'll be curious to see how they'll be involved in this story and also wonder if Venus will make an appearance. I really love the 'weapons close up' reference to the 80's cartoon intro. This has been a year full of references and homages to that show. Can't wait to see what happens next. 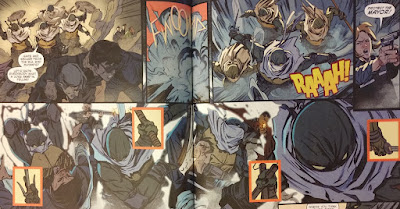 Leave your thoughts on this article!

By Mark Rodriguez Danger Girl is another one of those series from the late 90's/early 2000's that I only heard about from Wizard ma... 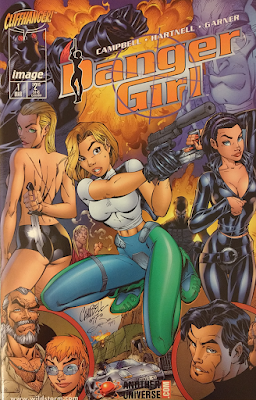